Dr. Jaime Prohens from the Universitat Politècnica de València (Spain) explains why crop wild relatives could play a major role in eggplant pre-breeding as a potential answer to climate change.  He is the lead investigator in one of the nine pre-breeding activities currently underway in the project Adapting Agriculture to Climate Change: Collecting, Protecting and Preparing Crop Wild Relatives initiative, supported by the Government of Norway. 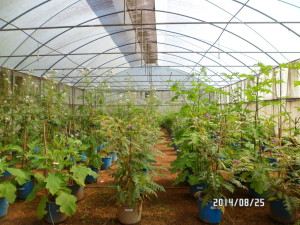 Why was eggplant chosen for pre-breeding?

Eggplant is important to developing countries. It is mostly grown in tropical areas, with China being the main producer. However, India and countries in Southeast Asia, as well as Turkey and some areas in North and West Africa are also very important eggplant producers. These countries need new varieties that can, or will, adapt to new challenges, like climate change or diseases.

What is the role of crop wild relatives in eggplant improvement?

Up to now, few efforts have been made to use wild relatives to improve the crop, Solanum melongena, though many people think there is a better chance to find the variation we need in the wild species. We are mainly interested in such traits as resistance to drought, as well as to soil pests and diseases. For example, Solanum torvum, a species from South America, which is used as rootstock for eggplant grafting, is resistant to many soil-borne diseases. Many of these species also have high levels of phenolics, which are beneficial to human health: chlorogenic acid, for example, which has been shown to have a positive effect on reducing cholesterol levels and regulating glucose levels in the blood. Another species, Solanum dasyphyllum, also has a very high content in chlorogenic acid and could be used to improve the bioactive properties of the eggplant.

The crop wild relatives we are using now are accessions that come from existing collections of germplasm. These were obtained from our seed bank here at the Polytechnic University of Valencia, which also includes cultivated material from Sri Lanka and Côte dIvoire. We use this material after consulting our colleagues in those countries to ensure that these materials are representatives of local varieties.

Of course, we are interested in using other materials too, as they can bring new genetic variation and new traits that can be of great interest. Under this same 10-year effort, colleagues at CIAT carried out a gap analysis study on wild relatives of the eggplant. The gap analysis shows that there is still much diversity that has not been collected, especially in some key areas of East Africa.

What will be the main outputs of your project?

The eggplant is a crop that is related to many wild species that grow in very diverse environments, and many of these can be crossed with domesticated eggplants. By introgressing traits such as resistance to drought, higher temperatures, and salinity that are present in these wild species, it will be possible to widen the genetic base of eggplant production, and improve its adaptation to climate change. 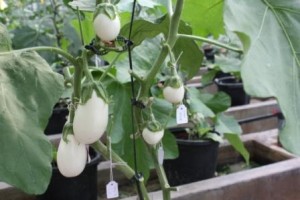 Climate is becoming more variable and erratic, resulting in periods of higher temperatures combined with low precipitation, which subjects plants to greater stresses. In many areas of the world, there will be more and longer droughts, which means there will be less water available for watering crops like eggplant.

This, of course, means that we need to develop plants that are more resilient and able to withstand abiotic stresses. These types of plants will be of great interest to sustainable agriculture, because they need less inputs  less water, for example, and as a result, they become more efficient crops.

By the end of our pre-breeding project we should have material much better adapted to these harsher conditions, that local breeders in Sri Lanka and Côte dIvoire will be able to develop into new varieties of eggplant which local consumers will like, and local producers and farmers will be able to grow.

How far have you got?

The project is planned for three years, and we are now at the beginning of the second year. It is a two-part project: the first one employs a short-term approach, where we work in our lab on introgression lines with Solanum incanum, which grows in desert areas. This will mean that we have advanced backcrosses (i.e., generations obtained after successive crosses to eggplant) with almost all of the genome coming from the domesticated type, Solanum melongena, but each of these lines has small amounts of the wild relative DNA. We are creating hybrids with local varieties from South East Asia and West Africa in order to develop drought resistance.

The second part of the project is more ambitious in its approach. Its what I call introgressiomics. Here we introduce large chunks of the genomes of the wild species into the genetic background of the cultivated ones. We have crossed the eggplant with thirteen different wild species from different areas, including some species from the New World. At this point, we have been very successful in obtaining many interspecific hybrids, and this year we are going to backcross again with the domesticated eggplant.

How much diversity are you working with?

We are working with six eggplant varieties: three from Sri Lanka and three from Côte dIvoire, which we have crossed with 27 accessions of 15 wild related species. By making these crosses, we have obtained almost 60 different hybrid combinations. This is the largest number of hybrids ever obtained with wild species of eggplant. The number of plants that we are managing, if we take into account all three countries, will be more than 1000 in total for this year.

Who are your partners?

Among our partners for this project is the University of Peradeniya in Sri Lanka. This country is also represented by the Department of Agriculture and several research stations, which participate in evaluation trials. The idea is that local seed companies can also participate in the evaluation of materials towards the end of the project.

In Côte dIvoire, we have partnered with the Université Félix Houphouët-Boigny and with the CNRA  the National Agricultural Research Center. There are also some local experimental stations and breeding companies interested in evaluating materials for this project.

But we expect that the project will be of global interest because these materials, which contain multiple introgressions from wild species, may be not only more adaptable to climate change, but also have other interesting traits, such as resistance to new diseases or new pests, or increased content of bioactive compounds beneficial to human health. What we are obtaining is genetic material that is of interest on a global scale, and it will be available to all.

What can you tell us about the capacity-building aspect of this project?

This is one of the things that the project will do. We are bringing doctoral students and researchers from Sri Lanka and Côte dIvoire to our research institute in Valencia for training in modern breeding techniques. This year, two scientists from Sri Lanka have worked with us for three months and received training in the use of molecular techniques for eggplant breeding and in embryo rescue. We also have a PhD student from Côte dIvoire joining us for six months and a researcher from the same country for three months. And by the end of the year we expect more students from Sri Lanka and Côte dIvoire for training. We are hoping that the scientists who have trained here with us will transfer this knowledge to local technicians from breeding companies and also use it for training new students back home.

To me, this project exemplifies a very promising approach to ensuring global food security: we utilize material from our collections and our technical expertise to develop material which will be used by local partners in developing countries to create new crop varieties adapted to local needs. At the same time, by working side by side with colleagues from these countries, we share knowledge that they can use to strengthen the professional base back home, and this will create a lasting legacy. The Crop Trust has really hit on the right formula with this project.