Grown in more than 114 countries worldwide, sweetpotatoes are an important staple crop particularly in Sub-Saharan Africa and East and Southeast Asia. They have increasingly been the focus of attention of crop breeding efforts to enhance food security in food-insecure regions of Africa. Orange-fleshed sweetpotatoes, in particular, show promise as a solution to vitamin A-deficiency, thanks to their high beta-carotene content. The crop can be cultivated from humid to semi-arid conditions, and has proven to be resilient to natural disasters. Scientists, however, believe that its potential is still largely untapped and that crop wild relatives of sweetpotato, in particular, urgently deserve attention for their promising contribution to crop improvement.

Sweetpotato can grow in marginal soils and some varieties thrive even in difficult conditions like heat and drought. The crop requires little attention and can grow profusely. However we observe large yield gaps due to vulnerability to pests and diseases as well as climate change,says Bettina Heider, a genetic resources specialist at the International Potato Center (CIP) and co-author of a recently-published scientific paper on crop wild relatives (CWR) of sweetpotato.

To develop improved varieties, plant breeders require a diverse pool of genetic resources, which is not entirely available in the case of sweetpotato. Crop wild relatives, the undomesticated cousins of cultivated crops, grow well in difficult conditions, and can be used to introduce greater tolerance to heat and other stresses to the crop.

For Colin Khoury, a researcher at the International Center for Tropical Agriculture (CIAT) and lead author of the study, it is surprising to see how underutilized the sweetpotato CWR are, given their potential. This is due to the lack of basic scientific data for the crop, including an underdeveloped taxonomy and an insufficient understanding of their geographical distributions, he explains.

Knowledge of CWR is indeed limited. The fourteen species that constitute the crop wild relatives of sweetpotato (the Batatas complex) are a complicated group of flowering plants: they hybridize and this makes understanding their biology more challenging, explains Rick Miller, a co-author and a professor of biological sciences at Southeastern Louisiana University, USA. The genetics of the CWR also is complicated. Some of the species have double the chromosome numbers due to something called polyploidy and sweetpotato itself has chromosomes that have doubled twice. Together this makes even knowing what to call each of the different kinds of morning glories in the Batatascomplex difficult, he adds. 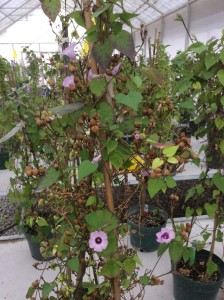 Heider, Khoury, Miller and colleagues from CIP, CIAT, USDA and research universities, revised taxonomic and geographic information on sweetpotato CWR, modeled their distributions, determined their availability to crop breeders, and explored their adaptations to various climatic and soil conditions.

Through a gap analysis the researchers identified further collecting needs for each wild species, and classified them by order of priority. A total of 78.6% of the wild relatives of sweetpotato considered in the study were assigned high priority for further collecting due to insufficient accessions in genebanks.

The scientists identified a total of 50 countries as targets for further collecting.  Regions of particular importance are central and southern Mexico and the southeastern USA, where many wild species can be found growing together. Unfortunately it is in these hotspots of great genetic diversity that the risk of losing it is particularly high. The research on CWR has confirmed that not only do we have few sweetpotato genetic resources in genebanks and herbariums, but the formal conservation of in situ resources is also very limited, indicates Heider, who hopes to see more interest develop for a crop whose potential for food security is great.

The research also offered an opportunity to explore geographic, climatic, and soil data to identify species that may be useful in terms of breeding. We specifically looked for drought- and heat-tolerance, which are major issues in Sub-Saharan Africa and also increase vulnerability to major pest incidence in the region, Khoury explains: We found that a number of these species, such asIpomoea littoralis, I. trifida, I. splendor-sylvae, I. leucantha, I. triloba, and wild I. batatas were potentially distributed in regions with low precipitation and high heat, well beyond the comfortable range of cultivated sweetpotato. Such species could be good candidates for exploration for these traits. This work represents some of the major advances that were made within the CWR project team, since the publication of the initial gap analysis method in 2010. 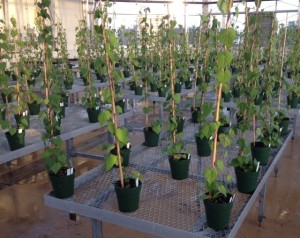 Drought experiment with sweetpotato crop wild relatives in the greenhouse at Southeastern Louisiana University. The research is being carried out by two undergraduate researchers, Tyler Gardner and Nicholas OQuin, with Dr. Rick Miller (R. Miller/SELU)

Another remarkable aspect of the research is that it brought together taxonomic, genetic resource, and breeder experts working on the crop. Perhaps the biggest impact of the paper will be the further collaborative efforts generated through this first collaboration. Much still needs to be done to understand which these species are, and what diversity they possess. A network of researchers across the world is anxious to work on answering these questions, says Khoury.

The research, supported by the CGIAR Research Program on Roots, Tubers and Bananas (RTB), falls under Adapting agriculture to climate change: collecting, protecting and preparing crop wild relatives, an initiative managed by the Global Crop Diversity Trust and the Millennium Seed Bank of the Royal Botanic Gardens at Kew, England.