There is a pressing need for agriculture to adapt to climate change, and learning more about wild relatives of crop plants could help us achieve this. Laura Jennings Collecting Guide Complier for the Crop Wild Relative (CWR) project describes how collecting guides produced by Kew help make seed-collecting fieldwork as productive as possible.

If you had to collect seeds from a particular species within a particular country, how would you know exactly where to go? How would you distinguish the species you were targeting from its close relatives? How would you know when the seeds would be ripe? Researching the answers to these questions is a key step in the collection of all types of seeds, and for the CWR at Kew we create collection guides (a kind of bespoke field guide) with all the information seed collectors need. 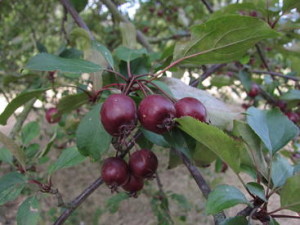 CWRs are wild plant species that share a common ancestor with cultivated crop plants. Throughout the history of agriculture, crop plants have become more and more genetically uniform through selective breeding for traits like high yield. By contrast, CWR species have been exposed to selection in their native range and retain a high degree of genetic diversity, so they retain genes that could allow them to adapt to environmental change. This has potential benefits for agriculture if those traits can be bred back into crop plants. Many CWR species are under threat in their natural habitats, so storing their seeds in seed banks is also a form of ex situ conservation, allowing them to be reintroduced into the wild as well as being available for scientific research.

Inside the collecting guide

Data for all the CWR species on the project list are stored in the database program BRAHMS, which allows us to generate dynamic field guides by extracting the information for the subset of species for a particular country and placing it in a template for publication. This semi-automates the process and saves production time and cost. We provide a description for each species in a standard Flora style, because the users of the guides are scientists rather than the general public. We also highlight the key features that distinguish the target species from its close relatives in that region and provide additional information like phenology, habitat and altitude range and a suggested seed collecting technique to ensure high quality collections. 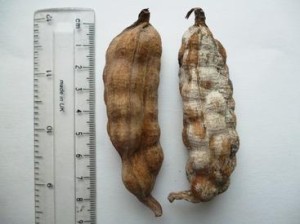 Dried specimen of Ensete glaucum fruit (a wild relative of banana). The huge seeds are visible through the skin. (Photo: L. Jennings)

Most Floras display distribution maps as a series of points, usually based on locations of herbarium collections, which are useful because the points are verifiable. In addition to point maps, we use data provided by CIAT, who use MaxEnt modelling within a Geographical Information System, to produce predicted distribution maps. They then cross-reference those maps with records of collections already in seed banks and other ex situ collections to produce a map of where the gaps in collections of each species are, so that seed collections can be targeted to populations not already represented within seed banks.

Arguably the most used part of a field guide is the images (the temptation to play snap with the plant in hand and the images in the guide can be quite strong), and images of live plants are often preferred by users. However, images must be authoritatively named to species to be of any use in a field guide, so images from herbarium specimens identified by an expert can sometimes be more useful, if less attractive, than those from live plants. Species that are very rare or have a restricted range have often never been photographed, so images from a dried specimen are the only option in those cases. 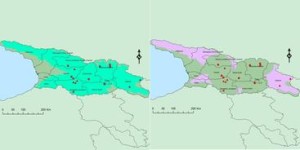 Maps for Malus orientalis (a wild relative of apple) in Georgia: predicted distribution on the left (turquoise), gaps in ex situ collection on the right (pink), red points are locations of previous collections.

Crop wild relative seeds are a largely untapped resource for crop improvement, but their potential is immense. In the short term, crop wild relatives are already being used to improve commercial crops. One example is the use of Helianthus paradoxus, a threatened species of sunflower from the USA, being hybridised with domesticated sunflower to increase its yield in salt-impacted soils (Hajjar & Hodgkin, 2007). In the longer term, wild relatives are a reservoir of diversity that could allow us to adapt agriculture to climate change and feed the growing human population, if we can collect, document and conserve them effectively.