At Kew’s Millennium Seed Bank, deliveries of boxes in various shapes and sizes are a frequent occurrence. The boxes contain collections of herbarium vouchers and seeds from wild species around the world. One box can hold a wealth of untapped genetic diversity, one plant may contain genes and traits that are resistance to certain pests, diseases, and can tolerate climatic stresses. These traits will be needed to adapt crop varieties to climate change in the future, and is vital to the current and future need of addressing food security and climate change. 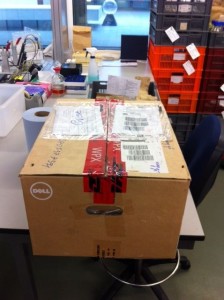 The arrival of banana seeds at the MSB. Photo by Danielle Haddad

In the 1950s, the commercially dominant banana, the Gros Michel, was virtually wiped out by a single fungus, Fusarium oxysporum, which causes Panama Disease. This seedless banana saw worldwide popularity in the 1940s and as the demand for this particular species grew, farmers of the Gros Michel banana began to produce this species almost exclusively. These bananas lacked the genetic diversity necessary to survive the disease because their self-pollinating style of reproduction meant that they were all genetically identical to each other. The industry turned to the disease resistant Cavendish banana, which is the cultivar widely seen on supermarket shelves today. 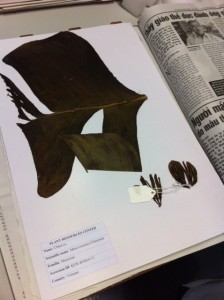 Herbarium sheet with a section of banana leaf. Photo by Danielle Haddad

Although resistant to Panama Disease, the Cavendish, like the Gros Michel, is a monoculture. This lack of genetic diversity leaves the Cavendish vulnerable to being wiped out by another disease, or even, an evolved strain of Panama Disease. They are especially susceptible and vulnerable to diseases because of the way theyre produced. Each banana grown and consumed has the exact same genetic make-up as the other, due to being seedless. Cuttings are taken from existing trees to produce another banana tree  this in effect has a serious consequence as what affects one banana will affect the other 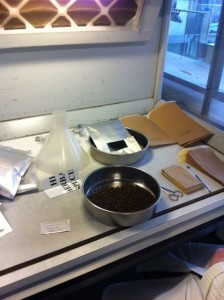 Undertaking the cleaning and processing of banana seeds at the MSB. Photo by Danielle Haddad

In this endless evolutionary tug-of-war between plant and pathogen, we need to be sure that we have all of the genetic resources available to safeguard our food supply. Wild relatives and cultivars of the banana have a wealth of genetic diversity which can be used to transfer useful traits such as disease resistance to the crop. Research is ongoing to maintain and increase the importance of banana as a staple food and cash crop.

The seeds delivered to the MSB couldn’t come at a more crucial time, as across Asia, Oceania and Africa banana plantations have tested positive for Panama TR4 disease and there are ever growing concerns on the Cavendish Banana industry. However, a new variety that is disease-resistant to Panama TR4 known as GCTCV-219 (Giant Cavendish Tissue Culture Variant) has just been accepted into the Japanese Market in April. This new variety is being considered as a good substitute to the Cavendish variety, although it contains less fingers (fruit) with an average of 4/5 per cluster it does have a sweeter taste and is being sold under the Miyabi brand. Field trial results show that the new variety of banana had good resistance to the disease with only 1% infection recorded after the second crop.

The development of GCTCV-219 highlights the importance of the work of crop wild relatives, if we do not conserve the seeds of crop wild relatives then what will be available to develop a new variety to fight the next disease, pest and change in climate. The worlds growing population places increasing pressure globally on farmers, breeders, scientists and all those involved in production systems to feed the new demand. Each seed stored at the MSB and gene banks around the world could potentially contribute towards breeders finding traits and characteristics that are resistant to pests, disease, adapt to climate change and contribute to the fight towards food security.