In a room filled with men, the voice of the lone woman at the head table commanded respect. Dr. Shivali Sharma captivated the room as she excitedly presented evaluation results and shared her passion for pigeonpea pre-breeding.

Shivali presented data from a germplasm line called ICPL 15028. “We found that ICPL 15028 was not only resistant to sterility mosaic disease and wilt but also resistant to phytophthora blight and it out yielded our local check varieties, which are susceptible to one or more diseases,” Shivali said. “We have identified this line as a promising donor for multiple disease resistance and it is now being used in national pigeonpea breeding programs.”

But the results Shivali showed and the promise of ICPL 15028 didn’t happen overnight. They are the result of many years of sweat and toil.

Shivali is co-leading a pre-breeding project on pigeonpeas with her colleague, Dr. CV Sameer Kumar. The project seeks to evaluate introgression lines that the International Crops Research Institute for the Semi-Arid Tropics (ICRISAT) has developed over the years by crossing the cultivated pigeonpea (Cajanus cajan) with its crop wild relatives. The researchers are selecting lines which look promising for resistance or tolerance to phytophthora blight, pod borer and salinity. 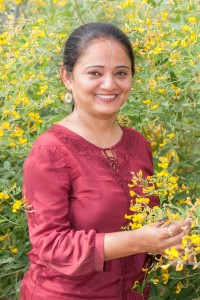 Dr. Shivali Sharma has emerged from the foothills of the Himalayas to become a highly respected pre-breeder of legume crops. Photo: Michael Major/Crop Trust

The pre-breeder from Himachal Pradesh

The daughter of a housewife and a university administrator, Shivali didn’t grow up in the foothills of the Himalayas in the northern India state of Himachal Pradesh thinking some day she would be a highly respected pre-breeder. “I grew up in the town and really had no interest in agriculture,” Shivali said. “But my grandparents lived in a farming community and as a child I remember wondering how we could improve crops to maximize benefits for all.”

Shivali eventually enrolled at Himachal Pradesh Agricultural University in the northern city of Palampur and completed a PhD in plant breeding. After working at her university and then as a rice breeder in private industry, she joined ICRISAT in 2008. Shivali excelled at ICRISAT and in 2012 she received the center’s Promising Young Scientist Award. Her abilities became apparent as she rose in the ranks and became the Theme Leader of Pre-breeding in 2016. She is now one of the most respected scientists in her field.

It wasn’t long after arriving at ICRISAT that Shivali became interested in pigeonpeas. “Pigeonpea holds great promise for sustainable agriculture, particularly in rainfed areas,” Shivali said. “Now as we experience climate change, pigeonpea is gaining the interest of researchers due to its reputation as a food security crop, income generator and commercial export commodity.”

Pigeonpea is the sixth most important grain legume crop in the tropics and subtropics and an important source of livelihoods for small-scale farmers throughout Asia as well as Eastern and Southern Africa. 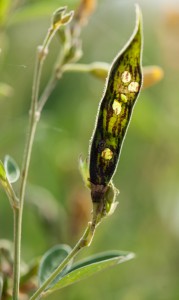 “It’s no wonder that pigeonpea is such a widely grown crop. Its seeds are rich in protein and we eat matured and dehulled split grains here in India as dahl. It has multiple uses and we can also use it for forage, fodder and fuel,” Shivali said. “But what’s really exciting about pigeonpea are its agronomic traits. It has a deep root system, which helps it to withstand drought. And like most legumes, it fixes nitrogen, so it actually helps enrich soils.”

Shivali’s excitement about pigeonpea is dampened by serious challenges. “Yields are stagnating,” Shivali points out. Diseases like phytophthora blight, wilt and sterility mosaic disease can dramatically reduce yields. Pests like the pod borer can wipe out 100% of a crop in a growing season. Abiotic stresses like salinity are also impacting yields.

“Productivity has been hovering around 800 kg/ha for the past five decades,” Shivali said. “We have reached a plateau now with our pigeonpea breeding.” Shivali explained that pigeonpea has a narrow genetic base, or rather breeders just don’t have a whole lot to work with. Over the centuries since pigeonpea was domesticated, and as the crop has been improved, it has lost a lot of its genetic diversity. The plants in farmers’ fields today only possess a small portion of the overall genetic diversity present within the pigeonpea genepool.

Pigeonpea has many distant cousins – crop wild relatives – and these can act as reservoirs of, and contribute, valuable genetic resources for pest and disease resistance, improved nutritional quality and desirable plant architecture. They possess high levels of resistance to diseases such as Fusarium wilt and phytophthora blight, insect pests such as pod borer, pod fly, and pod wasp, and tolerance to abiotic stresses.

Researchers have identified up to 10 wild species which can be crossed with cultivated pigeonpea and used in crop improvement programs. But breeders can’t magically cross two different species of Cajanus and expect to get the best traits of both species. That’s where pre-breeders like Shivali come in. Her task is to grab the favorable traits from the wild species, like resistance to phytophthora blight, and combine those with favorable agronomic traits found in the domesticated versions of pigeonpea.

Pre-breeding brings in the best traits

To illustrate pre-breeding, Shivali takes us back to ICPL 15028. “Based on the evaluation of wild Cajanus species, several accessions were reported to exhibit high levels of resistance for important diseases and insect pests,” Shivali explained. “So out of those wild species, Cajanus acutifolius was selected to be a donor parent in the crossing program.” A wild species like Cajanus acutifolius might be disease and pest resistant but generally possesses poor agronomic traits.

“Here in India we have a very promising and popular variety known as Asha,” Shivali said. “It’s grown on a large scale, but it is susceptible to pod borer and phytophthora blight. Asha was crossed with the Cajanus acutifolius accession that showed resistance, and that gave us the first offspring, which we call the F1s. F for filial.”

However, during these initial crosses, breeders don’t just get the good traits from the wild parent in the offspring. There are also bad introgressions, which have to be weeded out.

“We want to recover the favorable agronomic traits of the cultivated variety, so we follow the backcrossing approach.” That means the first offspring – the F1s – were crossed again with the Asha variety. Twice. Then, the advanced backcross (BC2F1) population was ‘selfed’ to generate the BC2F4 population. “Simply put, that’s a whole lot of crosses and a whole lot of time,” Shivali said.

Once the team finished all this crossing, they evaluated the crop for two to three years at ICRISAT Pantucheru, in collaboration with ICRISAT’s pigeonpea breeder, Dr. CV Sameer Kumar. “We identified 15 to 20 high-yielding lines. After two years of evaluation with our national partners, we noted that ICPL 15028 out-yielded the check (or control) variety. So this line was promoted to initial varietal trials,” Shivali explained. “Our evaluations in various locations now show that ICPL 15028 has high levels of resistance to not only sterility mosaic and wilt diseases but also to phytophthora blight and is also a high-yielding line. This is very exciting for us.”

The ICRISAT team is closely monitoring the performance of ICPL 15028 and other promising lines at national research stations. The evaluations have been conducted under the close eye of Dr. Jaganmohan Rao at the Professor Jayashankar Telangana State Agricultural University in Warangal and Dr. L. Prashanthi at the Acharya N.G. Ranga Agricultural University in Tirupati, who have been running trials for three years to evaluate the agronomic performance of the introgression lines.

Dr. Benjamin Kilian, the Crop Trust’s Plant Genetic Resources Specialist and coordinator of the Crop Wild Relatives Project’s pre-breeding work, recently visited the Warangal trials with Shivali and Jaganmohan. “It is very promising to see the plant architecture and the yield potential of some of the lines,” Benjamin said. “In particular, I was happy to see progress is being made in developing lines which will mature earlier and are more resilient to climate change.”

The trials at Warangal and Tirupati show the value of working with national partners. “By partnering with regional agricultural research stations, ICRISAT has been able to evaluate this material in varied agro-ecological zones,” said Benjamin. “The data received from these evaluations will be of tremendous value as we continue our search for pigeonpeas which are resistant to pod borers and phytophthora blight and tolerant of salinity.”

Back at the annual planning meeting of the pigeonpea pre-breeding project, Shivali and Sameer set up their workplans for 2018 – the last year of the current project. The national partners around the table all committed their time and resources to continue working on the project and were excited about the prospect of another year of evaluation trials not only within research centers but also in farmers’ fields. But the ICRISAT team isn’t going to be able to rest after 2018. Another project on evaluating pigeonpea pre-breeding lines is planned and Shivali hopes to have many more opportunities to tame the wild pigeonpea.

This pre-breeding project is part of ‘Adapting Agriculture to Climate Change: Collecting, Protecting and Preparing Crop Wild Relatives’, funded by the Norwegian Government, and coordinated by the Crop Trust with the Millennium Seed Bank, Kew. All materials produced by the project will be made available to users through the standard material transfer agreement (SMTA).

READ MORE: ICPL 15028 is one of 3.8 million accessions listed on Genesys, the global portal to information about Plant Genetic Resources for Food and Agriculture (PGRFA).

READ MORE: A pigeonpea accession named ICP 8863 was directly released from the ICRISAT genebank in 1986. The story Maruti – the pigeonpea saviour documents the long-term impact of its release.