Pre-breeding expert consultations for several of the target crop genepools were organized, which helped to prioritize and guide the development of projects on crop wild relative pre-breeding and evaluation. In addition to the two pilot studies, projects for seven additional crops have been developed thus far: potato, lentil, eggplant, chickpea, carrot, (durum) wheat and sweet potato. The pre-breeding projects include capacity building components and feature collaboration between research partners in the CGIAR system, universities and national program partners in the developing world. For example, the potato pre-breeding project team includes the International Potato Center (CIP) in Peru, the National Agricultural Research Institute (INIA) of Uruguay, and the Brazilian Agricultural Research Corporation (EMBRAPA).

In the current phase (2017-2020), the focus is on expanding the pre-breeding work and evaluating germplasm derived from CWRs. Newly developed pre-bred lines are being evaluated under field conditions in target environments with breeders and farmers. The project integrates promising materials into the breeding pipelines. Evaluation projects for 13 crops are supported.

All key germplasm material produced will be made available to users with the standard material transfer agreement (SMTA) under the International Treaty for Plant Genetic Resources for Food and Agriculture. 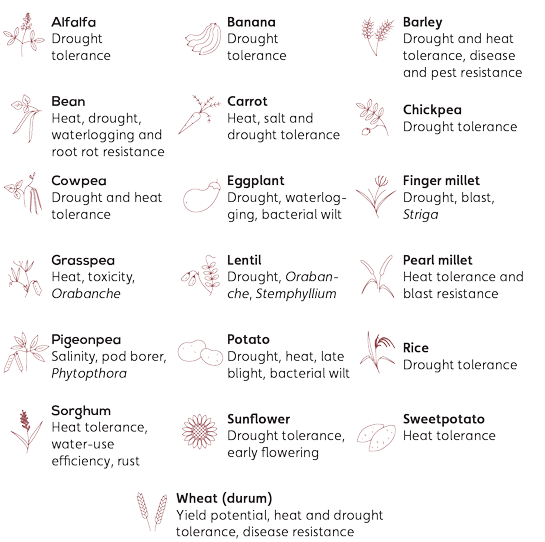 The Project has teamed up with the James Hutton Institute to ensure that much of the Project’s pre-breeding data is available on a common platform. Hutton has been developing software known as Germinate 3 which is specifically tailored to handle complex data associated with plant genetic resources collections. For more information on Germinate, click here.

Bean: Scientists at the International Center for Tropical Agriculture (CIAT) have identified two wild Phaseolus acutifolius accessions  which can tolerate high night temperatures. They have been used as parents in breeding programs for improving heat tolerance. Our partners have also found that bean wild relatives have traits for tolerance to waterlogging and root rot pathogen.

Pigeonpea: Pre-breeders at the International Crops Research Institute for the Semi-Arid Tropics (ICRISAT) have selected a high-yielding line (ICPL 15028) which has resistance to multiple diseases (wilt, sterility mosaic disease and phytophthora). The line has been included in the national crossing program of India.

Pearl millet: Blast is a newly emerging disease that is devastating the production of pearl millet in India and Africa. Researchers at ICRISAT discovered that some populations of a pearl millet subspecies found in Mali and Chad has resistance to multiple forms of blast. They crossed them with the domesticated pearl millet and developed four pre-breeding populations for further testing.

Finger millet: Progress has been made in Kenya to identify crop wild relatives tolerant to the parasitic plant Striga (witchweed), which can cause crop losses of up to 100%.

Eggplant: Project partners generated promising materials and lines with drought tolerance. In the second phase of the project, partners will evaluate the new pre-breeding materials in different environments. The Crop Trust is collaborating with the World Vegetable Center as well as five breeding companies in this work.